One of the great things about Blantyre is that it’s centrally located.  You can get to the lake in two hours, Zomba in 45 minutes, Mulanje mountain in an hour, and there are about three national parks within an hour’s drive.  Saturday, a group of us decided to venture down to Nyala, a very small park, but one of the only places in Malawi you can see giraffes.  We loaded up in two vehicles: a Toyota land cruiser nicknamed The Beast, and a minivan, or people carrier, named Daisy.

Shire River in the Distance

It only took an hour or so to get there, traveling along a winding road down a huge embankment that took us from the Shire highlands to the lowlands.  We crossed the Shire and were in sugar cane country.

We started by having a huge picnic lunch.  Everyone brought different dishes to share and we were stuffed by the end.  The monkeys were gathered behind the picnic hut, hoping for any leftovers we might leave them. 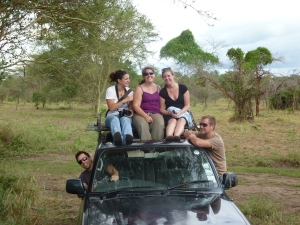 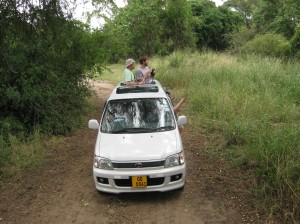 A minivan, the perfect safari vehicle.

The Beast was made for this kind of adventure.  Our friends had placed a large piece of wood over the luggage rack so we could ride on top, giving us a better vantage for animal viewing.  We had a good team: Sam was a considerate driver, warning us to limbo beneath low-hanging limbs, and Rick has a sixth sense about where the animals are hanging out.

The boy’s car, Daisy, handled the roads well and with her two sun roofs, they were able to get good views.

Talk about a good perch. 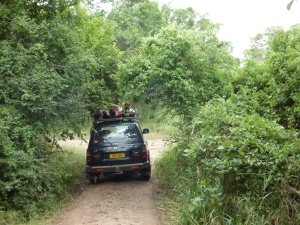 We had an amazing afternoon – we saw monkeys, giraffes, zebra (including a baby!) impala, nyala, sables, kudu, and wildebeest.  Sandy swears up and down that the Daisy crew say a black cobra – but there is no photo evidence and we’re not sure if there are cobras in Malawi.  But still, they swear they saw it and feel sorry for us for having not seen it…

The baby could barely stand up.

A herd of Wildebeest

There were beautiful views on the drive home as the sun was setting and thunderstorms were moving in.  It was one of those perfect days that made us really happy to live in this amazing place!

6 responses to “Our First Self-safari Expedition”