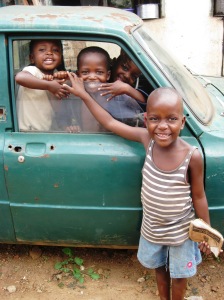 Maybe a bit young to drive...

One of my proudest accomplishments in the eight months we’ve been here is that I learned how to drive a stick-shift…on the wrong side of the road…while dodging minibuses.  I was fortunate to have a patient and kind teacher in Sandy, but it came down to wanting independence.  It isn’t easy to get around Blantyre without a car so back in April, I forced myself to drive every day for a week.  I can drive pretty well now – I still make mistakes and will stall out every once in a while, but now enjoy the challenge of a manual car (plus it makes you feel like you’re staring in an action movie).

Driving overall, though, is a challenge in and of itself.  There is no real public transportation; instead, Malawians (like many Africans) use minibuses.  I’ve mentioned them before – for a small fee you can swash into one of the seats and hope that the non-English speaking driver is driving to (or somewhat near) the place you want to go. Many of them are actually pretty good drivers; the problem is that because there are so many minibuses they  make their own traffic rules.  They run red lights, come to a screeching halt in the middle of the road, pull out with no indicator – often without even looking, they honk incessantly, and they frequently break down. 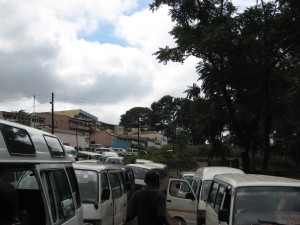 Minibuses all in a row

Another highlight of driving in Malawi is getting to watch the cluster-mash-ups that occur in BP parking lots.  I’m not sure what it is about BP, as opposed to other gas stations, but it is almost impossible to drive into a BP without getting blocked in, honked at, or almost hit.  Once time, we blocked someone in while Sandy ran to the atm – the driver of that car walked to his car, clearly saw our car directly behind it, turned his car on and started backing up.  Having witnessed these cluster-mash-ups before, I was ready with my hand on the horn, and honked to kindly ask him to please stop backing into our car – we’d be on our way in just a few seconds. 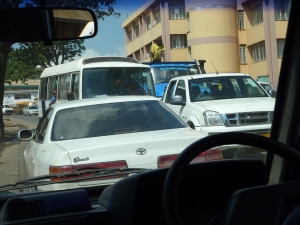 Cluster Mash Up (but on the road)

There are other interesting aspects of driving: once darkness falls, they turn off the traffic lights.  An added challenge is that it’s fairly common for cars to be driving at night with no lights on.

If you drive out of the city, it won’t be long before you come to a road block.  Some are more imposing than others – some have police men and women in full uniform, maybe a few semi-automatic weapons for show, and wearing very un-Malawian scowls.  They size you up as you approach – to pull you over they point to the side of the road, indicating that you should stop.  You slow down and wait for them to saunter up to your car, lean on the open window and stare at you for a few seconds.  Then they usually ask for your license and check your insurance.  If they are really on a power trip, they might ask to see the emergency reflective triangles that we are required to keep in our cars in case of a break down.

Most often though, the road blocks are on small roads where the police are friendly and bored – they usually ask you to pull over as a distraction in their slow day – they’ll take the opportunity to ask a few questions “where are you going? where are you from? where are you from originally? do you have brothers and sisters?  what are their names?  what do you think of Obama? do you want me teach you how to say all of that in chichewa?”  By the time you drive off with a friendly wave, you feel like you have a new best friend.  Once we even had a policeman pull us over to ask for a ride to the next road block.

There are (supposedly) six speed cameras in Malawi.  All the best NGO drivers know where they are and are able to avoid the traps – or talk their way out of a ticket.  A speeding ticket costs 5000 MK (about $35) and if you can’t pay it right then and there they will keep your car.

Another major challenge of driving in Malawi is that the animals here seem depressed.  The goats and cows especially.  Sometimes the chickens as well.  I’ve never been in a car and not had an animal hurl itself onto the road, seemingly to commit suicide.  Thanks to Sandy’s excellent driving, we’ve never actually hit one, but they don’t stop trying.  Goats will sometimes scurry across the road – the trick is to figure out what direction they’re going to go.  If you hit one you should pull over and try to find the goat’s owner.  A fair price for a goat is about 4000 MK.  Once you pay, you can keep the dead goat.

I think that you become accustomed to the challenges of driving here but the people who have visited us seem to have a hard time on the roads.  Some are vocal about their worries about a big truck up ahead, or the suicidal goats, but others sit quietly, their knuckles turning white as they grip the door or seat.  We try not to drive at night outside the city – there are no lights, no reflectors on the road, and people are everywhere – walking or biking on the virtually-non-existent shoulder.

No shoulder - lots of people

Malawians tend to be very courteous drivers.  They are very good about letting you into their lanes and not blocking intersections.  If someone breaks down, people rush to help.  There is a real camaraderie amongst drivers that makes it all much easier.  All in all, at the end of the day, it’s an adventure.