Nkhata Bay is a small but bustling town situated around a small harbor.  The coast is rocky, unlike the south, and the water a bright clear azure color.

We drove through town, past a massive soccer game, and up a steep rocky road that made Sandy really frustrated following the driving headaches of the last few days.  Mayoka Village, where we stayed, is a collection of stone chalets and huts nestled on a hillside.  The steps are rocky and uneven but add to the charm of the place.  After settling in, we headed to the main lodge overlooking the water and had some lunch and a few drinks.

Mayoka Village is often described as a mini paradise where people come intending to stay for a few nights and find themselves still there weeks later.  The staff are gregarious, open, knowledgeable and friendly.  They introduce themselves immediately and never forget your name.  You feel like you’ve been welcomed into a community as opposed to staying at a lodge.  The main area has a pool table, tables, several lounge areas, a restaurant, and bar.  We felt immediately at home.

View from the lodge 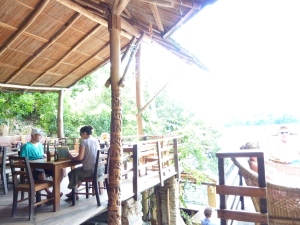 The first night there was a pool tournament.  Jackson, Kevin, and Sandy all did well, and Sandy was in the final.  Again, for the third night in a row, thunderstorms moved in soon after dark.

Sunday was a lazy day swimming, eating, playing bao, cards, pool, and relaxing while the weather remained rainy and drizzling.  Much to my excitement, it was pizza night so we had wood fire pizzas and were planning an early night.  Again, thunderstorms moved in.  Thunderstorms like I have never seen or heard before.  Lightening illuminated the lodge and lake for long seconds at a time.  The thunder was loud and startling.  At one point, the storm was right over us, and lighting and thunder hit at the same time – the crackling clap knocked out the power for a few seconds and when it came back on, Sandy was hiding behind the pool table.  I was sleepy and ready for bed, but we were trapped in the lodge by the torrential downpour.  By midnight, other guests and staff were sleeping on sofas and in chairs.  Finally the rain dissipated long enough to escape back to the room. 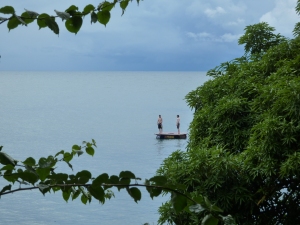 Sandy and Jackson on the raft

View from the restaurant

Assuming the Bua River which had forged just two days before had received even a quarter of the rain we had at Nkhata Bay, we decided the road would be completely washed out, and headed south again through Mzuzu.  Mzuzu is the third largest city in Malawi, but that’s not saying much.  There is a main tree-lined street with shops and petrol stations.  It’s a charming town high in the mountains but because it was still rainy and drizzling we didn’t see much.

We headed south from Mzuzu and drove for five hours back to Lilongwe.  The drive was gorgeous.  The landscape was varying from steep granite peaks to acres of pine forests.  They speak different languages there, so we had to learn basic phrases in Tonga and Tumbuka.

The rest of the trip south was relatively uneventful as we made our way back down south.  We were sorry not to get to see more of the northern region, but will plan another trip soon.