Air Malawi – Affectionately known as “Air Where Are We?”

Air Malawi – Affectionately known as “Air Where Are We?”  or “Scare Malawi”

Don’t get me wrong – Air Malawi has an excellent safety record.  I don’t care that a friend’s pilot friend came to visit and casually commented that if his plane had made the same noises the Air Malawi plane made, it would be grounded.  And I try to ignore the fact that Air Malawi is on the UN’s do not fly this airline list.  As far as small African airlines go, it’s really pretty good.

Except that recently, more flights have been canceled than have taken off… seriously, that’s a fact.  But, as a nervous flier (terrified flier when there is no alcohol) I am happy to know that Air Malawi cancels flights when there is a mechanical problem.

Our flight to Dar es Salaam was no problem – I took my anxiety pill and was subdued enough to not care that our plane was (1) tiny (2) held up in the sky by propellers and (3) judging from the shag carpeting, probably from the 1962.

But let me describe to you our trip home from Tanzania (this is going to be a long post…):

We had taken the ferry from Zanzibar Thursday morning, getting up at five.  The seas were rough and Kevin, Sandy, and Clem felt sick the whole time.  Clem actually threw up in a bag a couple times, while Sandy and Kevin were just greenish-yellow for the whole trip.  And then someone topside got sick – on Clem, right on her face.  It was a worrying start to the journey home.  We found a hotel that only charged Clem $33 dollars to take a quick shower and then we were off.

Waiting in the Dar airport, a chipper Air Malawi representative called Sandy’s cell phone:  “We just wanted to inform you that your flight has been canceled.  But don’t worry, we have rebooked you on our next flight this coming Sunday.  You can use your same tickets.”

Sandy and Kevin rushed down the Air Malawi desk – which was closed.  They waited an hour and a half until a bewildered airline representative finally showed up.  When Kevin and Sandy asked what the alternatives were to staying in Dar for an extra four days, the guy said, “ahh..no – the next flight is Sunday.”

Sandy and Kevin managed to cajole, argue, and plead until finally, he agreed to put us on the South African Airlines flight to Johannesburg later that afternoon.

I would like to say that I was taking all of this news really well and sitting there calmly, ready to take to the skies in any direction as long as it got us home.  But no – for me, the idea of a whole additional flight to South Africa made my stomach flip.  The flight, though, was great – South African is such a nice airline – they give you as much free wine as you want!

But of course, there was no one from Air Malawi there to greet the 18 passengers who had been rerouted to Johannesburg.  We got our luggage, checked in with the information desk (no Air Malawi) and then went to the Air Malawi desk, which was closed and locked.  We asked the Swissport woman next door if they had seen anyone from Air Malawi – she said “um, no, not in, well, months.”

So we found rooms at City Lodge (attached to the airport) and settled in for the night.

The next morning, we were still unsure that we were booked on the one Air Malawi flight headed to Blantyre that day.  We asked at the Air Malawi desk but they said we just need to stand in line to try and check in.  Not a problem, I thought, until I realized that the enormous mass of people and luggage carts strewn haphazardly across the entire departure check-in area was, in fact, the Air Malawi check in “line”.

To their credit, once the manager arrived, the issue was sorted our quickly and our bill was paid in full.

The flight was 3 hours late, which was ok with me – more time to duty-free shop!

We finally got on those big buses that take you to your waiting plane on the tarmac.  There were many rumors about where this plane was actually going.  Many said that we were actually flying to Lilongwe, despite the fact that our tickets, the departure boards, everything, said Blantyre.

When we arrived at the plane, it wasn’t an Air Malawi plane at all – it was a chartered jet.  Of course it was because Air Malawi’s two 737’s have been grounded in South Africa for almost two years because they can’t pay for the maintenance on them.  So, as Sandy says, you know it’s a bad airline when you are actually relieved, even happy, to find out the plane isn’t owned by the airline.

The Melissa Elizabeth, as our plane was called, was lovely and staffed by four lovely flight attendants all wearing uniforms from different airlines. 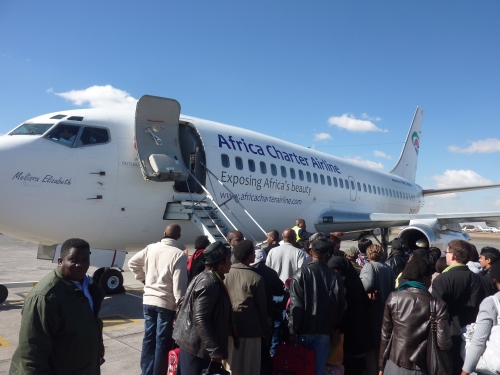 We sat down in our seats and politely asked the flight attendant with the scorpion logo on his clothes, if he knew where the plane was headed – to which he responded Lilongwe.  The pilot, I noticed, never mentioned the name of the city we were flying to – instead, he’d say “We’re making our final descent into Malawi…”  I imagined him in the cockpit, turning his map of Africa right way up, “so you’re saying Malawi is a country?”

In any case, we made it to Lilongwe – had to disembark – go into the airport (which is hilarious – you have to get on those big buses again to drive 100 yards to the terminal – it would be so much faster to walk) – go through passport control, customs, and recheck in.  All this to get back on the same plane and fly an additional 25 minutes down to Blantyre.

The funny thing is that people disembark planes completely differently here than they do at home.  At home, you slowly file out of the plane, each row emptying in an orderly fashion, everyone helping out with luggage.  Here, it’s as if the person who gets off the plane first gets a prize.  You jump up as soon as the plane hits the ground, push through to get to the aisle, push down the aisle, knocking people over as you go.  If you aren’t in the aisle by the time the door opens, you will probably be the last person off the plane.

The Air Malawi representative re-checking us in had the audacity to ask us for our original flight itinerary.  It probably wasn’t an unreasonable request, but we were so tired, and this was the first time we had been asked for it since flying to Dar over a week before – not one other person on the myriad of flights we had taken had asked to see it.  This guy apparently really needed this one document to get us back on the same plane we flew in on.  I was lucky to have it buried in my purse.  Sandy asked later what we would have done if we couldn’t find it.  I said, I would have grabbed the man by the back of the head, pounded his head into the key board three to five times and then asked him in my nicest voice, “can you find our reservation now?”

One of the best parts of the whole trip, though, was Tumbi.  During stressful travel like this, you tend to bond with your fellow travelers.  One of them was a Malawian mother traveling alone with her 18 month old son Tumbi.  He was, and I’m not exaggerating, the best behaved person in the whole entourage.  He kept everyone’s spirits up.  Once he discovered the joys of peek-a-boo, he entertained himself, and half the plane, for hours. 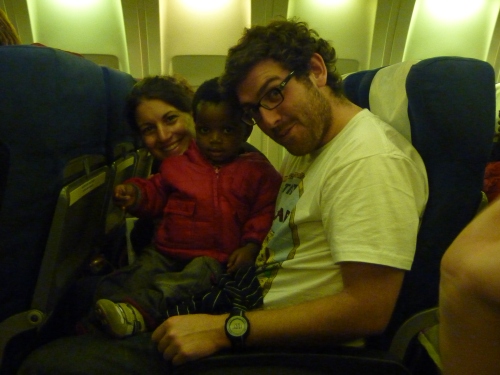 Tumbi and his fan club

Ah, Air Where Are We.  Here’s the thing – despite all of this – we made it home safe and sound and in my book, that makes an excellent airline.

Our friend Jen flew Air Malawi from Johannesburg a week later.  They were delayed 6 hours, then took an unscheduled detour to Harare, Zimbabwe, then did the same thing in Lilongwe, then landed in Blantyre at 2 am.

And the 11 passengers who were on our canceled flight to Blantyre and didn’t make it onto our Joburg  flight were put onto the South African flight the next morning – not because Air Malawi took care of them and booked their passage – but because the South African representative took pity on them and booked them in herself – at no cost to Air Malawi or the passengers.

And we heard of other people trying to get to Zanzibar who’s flight to Dar was cancelled – it took them 37 hours to get there.  At least our detours happened on the trip getting home….

Sorry for the tirade!  More about Zanzibar coming soon!

8 responses to “Air Malawi – Affectionately known as “Air Where Are We?””