When shopping for souvenirs and all things Malawian, there are really three options.  (1) You can go to a posh gallery in Blantyre or Lilongwe.  These lovely galleries stock beautiful, quality pieces and offer a calm, stress-free, clean environment in which to peruse them.  The downside is that in the gallery, you will pay five or six times what you would pay at a market.  No bargaining here.

Then there is option two (2).  Every few days or so, a young, enterprising gentleman, such as Eric, will show up at our door with a backpack full of curios.  Usually they bring a few carvings, paintings, and some jewelry.  Again, you can look over the items in calm and peace and can find some nice unique pieces.  You can also let Eric know if you’re looking for something particular and he will bring examples for you to see.  Here also, though, you will probably pay more than in a market – usually two or three times more.  You also don’t have as much of a selection.  You can bargain a little but you know that these young men are trying  to make a living and have been doing it long enough to be clever middle men. 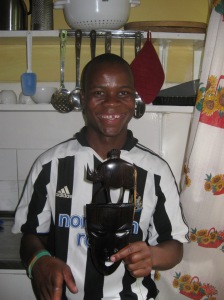 Finally, the third (3) option is to go to a curio market.  There is a big one in Lilongwe and one here in Blantyre.  You can also find venders and artists selling their wares at the foot of Mt. Mulanje,  Zomba mountain, along the lake, and along some of the busier roads.

The market in Lilongwe is in a parking lot and hosts probably thirty or forty venders.  You can find everything from animal carvings, to colorful cloth, to musical instruments.

And the venders see you coming a mile away.

Sandy and I visited this market in Lilongwe a few weeks ago.  The second we stepped out of the car, we were besieged.  Each eager vender verbally pulled us and pushed us and assured us that he would give us a good deal.  We walked slowly up and down looking at everything displayed.  Each time we came to a new vender, he would pick something up and show it to us, explain how this particular item is the finest in the whole market, and for us – good price – special price.

So once you find something that you really like, or even kind of like, or something that they hold up to you and you thought it was really ugly, but you said it was nice because you didn’t want to hurt their feelings, they start to talk price.

I’ve found that if you’re clearly a tourist the price will be automatically jacked up by oh… around 10,000 percent.  And why not?  They are businessmen after all.  Here’s an example.  Sandy bought me a piece of this colorful cloth and paid 1,500 kwatcha.  He brought the guy down from 3,000 kwatcha so he was feeling pretty good about it.  He later learned from a colleague that it should have been about 500 kwatcha.

While you do have to negotiate and bargain, it’s definitely an acquired skill.

So the markets have their upsides and downsides.  The venders can be aggressively pushy, but there is an amazing selection, so you can find some really beautiful things and negotiate good prices.  You have to navigate through the tacky kitsch, but there are definitely some talented artists.

Here are some photos of the treasures we’ve collected so far: 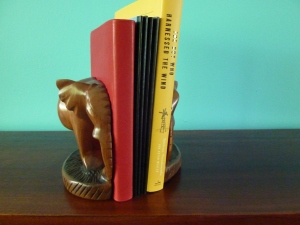 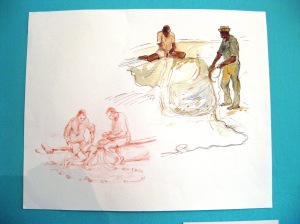 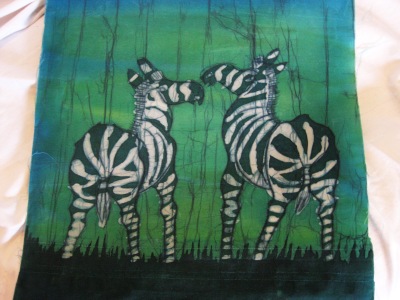 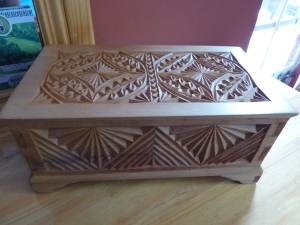 Mt. Ndirande in the background

Sunday morning, we crossed the high school campus, left the school’s gated enclosure and stepped into a whole different world.  Ndirande, named for the mountain rising behind it, is one of the most impoverished townships in greater Blantyre.   Despite the glaring poverty, it is a vibrant area famous for its market.  Lloyd, one of Sandy’s colleagues, met us right outside of the school.  We were lucky to have him with us as even at 10:00 on a Sunday morning, the area can be a bit rough.  We were definitely the only azungu in the area.

We hopped into a mini-bus (Malawian public transportation)and rode up the hill closer to the mountain and exited at the market.  The ride in and of itself was an adventure.  Each minibus has a driver and another man in charge of advertising the route, and collecting fares.  There were three buses lined up, so we had three guys aggressively vying for our business; Lloyd expertly negotiated our fares and steered us into a very crowded bus with three seats in the way back.  In the five minute ride, we passed small cardboard shacks lining each side of the road that housed small businesses selling wood, furniture, and coffins.

Upon exiting the bus, we arrived at the market.  The best way to describe it is organized chaos.  There are hundreds of stalls that wind along the road selling everything from half-empty cans of paint to cassette tapes.  Vendors sell piles of wrenches, nails, hammers, irons, second hand books, third or fourth hand clothes, cell phones, and tires.  Anything you can think of is there.  The casual disarray and muddy paths make it feel like the set of Deadwood.  Lloyd then led us down a dirt alleyway between stalls into the sprawling labyrinth that is the heart of the market.

He first took us to the vegetable section where women in traditional dress had piles of greens, onions, peppers, and tomatoes. I think that because we had Lloyd there, we got better prices.  He then led us through the fish section, which consists of eight tables piled up with fresh fish of all sizes and types.  These are whole fish, mind you, not filets.  The vendors spend their time calling out the names of the fish and the prices and swatting the flies away.  Then we wound our way to the fruit section and bought mangoes and a pineapple.

Most children, bare foot and in tattered clothes, stared at us as we walked by – some smiled back when I smiled and some said “Hi boss, how are you?” eager to show off their English.  One woman with an infant on her back, gave me a high five.

There is constant noise as the vendors announce their goods and people greet each other.  Each area of the market had a different smell, ranging from freshly cut wood to fresh fish. People are dressed colorfully and traditionally.  The whole area feels so animated and energetic.  By the end of the trip, we’d bought pineapple, mangoes, tomatoes, cucumber, peppers, and bananas for a grand total of about $6.  Can’t wait to go back!